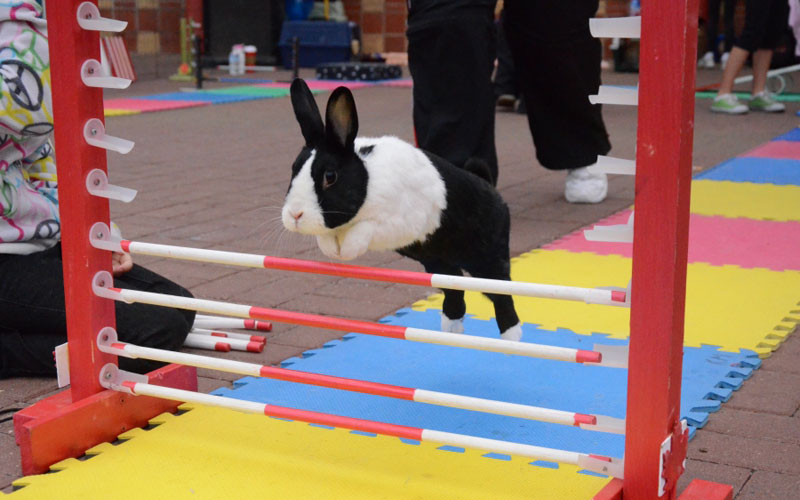 When it comes to magic shows, the white rabbit being pulled out of the hat always makes for great entertainment. How did the fluffy bunny in the cute bow tie just appear from out of nowhere, his long ears sticking out of a black top hat as the magician parades him around the room amid a dust full of glitter? The problem is, the bunny is only ever the prop and never gets to shine in his own right. It’s time for magicians to take a back seat as we show you tricks you can teach your rabbit.

Play fetch
When Flemish Giant rabbit Mason showed an interest in fetching a ball, his owner Kim was both surprised and delighted. “Yes, Mason will fetch his ball when thrown, but being a bunny he doesn’t always do it on demand, only when it suits him. We just continually throw it and say ‘Where’s your ball?’ and if he likes he will go fetch it.” Kim sent me a video as proof of his skills: it shows Mason grabbing the ball, putting it in his mouth and then hopping away, as if he’d won a prize — highly adorable. Carolyn found Mason a buddy from her adopted ranks and now his owners are teaching his Sally — a ruby-eyed white from New Zealand — to play ball too.

“It started with an American-shaped football with a bell in it, and just like a dog or a cat, you keep repeating the same action. Rabbits really are amazing creatures,” says refuge owner Carolyn. The bunny adorer says rabbits are social creatures and need to be around people, and games like fetch, with a ball or a toy, are a great bonding experience and a lot of fun. Imagine how many likes on Instagram you could get if you filmed your rabbit in slow motion, running through the grass to chase a ball?

Jumping jack rabbits
Obstacles courses aren’t just for feisty Kelpies and spring-jumping Border Collies. YouTube has some incredible videos of rabbits doing agility, running from station to station. North Metro TV’s documentary Hop, Jump and Play showed the Minnesota Companion Rabbit Society put their bunnies excitedly through the tunnels, see saws, bridges and hurdles. Some had been doing it for years and were totally attuned to their owner’s directions as they sped through the indoor course. Just like obedience training, the rabbits are encouraged on a lead with positive praise, some of them clearing more than six hurdles at a time. One Rabbit Grand National Final saw Swedish champion Cherie jump all the hurdles in 7.5 seconds, without knocking a single one.