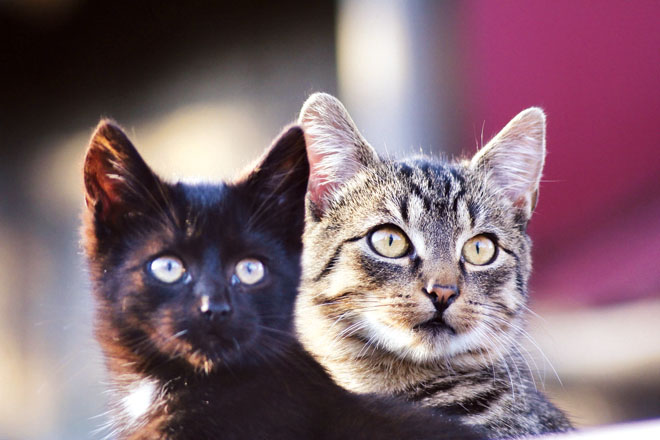 We love our feline friends, but when it comes to cat ownership, is two better than one? Dr Kate Mornement reports.

Many cat owners who work long hours assume their pet would benefit from the company of another cat, but is this actually the case? We know that dogs are highly social and most would prefer having another canine companion around if their owner is away from the home for long hours, but is this also true for cats?

Unlike dogs, cats are not highly social. In the wild, most feline species live solitary lives, with males and females only coming together to breed. The female then raises her kittens on her own. Once the kittens mature, they typically disperse and establish their own territory. The only exception to this rule is lions that live in a pride. In the wild, cats rely on their territory for their survival, so keeping intruders away is very important.

Although pet cats are domesticated and we provide them with everything they need, they still retain instincts and behaviours in common with their wild-living relatives and remain highly territorial. This means they often perceive another cat in their territory as a threat. This can cause some cats to feel stressed and anxious leading to aggression, spraying and other behavioural problems. This scenario is commonly seen in multi-cat homes when a new kitten or adult cat is introduced into a home with one or more resident adult cats, particularly if the resident cat was not well socialised to other cats as a kitten and hasn’t previously lived with another cat. This can cause perceived competition for access to high-value resources including litter trays, elevated spaces, scratch posts, food and water dishes, toys and attention from the owner. Neighbourhood cats roaming into another cat’s territory can also have the same effect. So if you have an older cat that doesn’t seek out the company of other cats or outright detests their presence, you may want to think twice about getting another one.

But it’s not all doom and gloom. Some cats living in the same home get along like a house on fire. This often happens when both cats were well socialised to other cats as kittens and if the cats were introduced into the home together when young. The temperament and personality of each cat is also important. Some cats enjoy socialising with others, whereas other cats do not. Some like to play rough, while others prefer a more hands-off approach to companionship. Space is also an important consideration. If you live in a small unit, two cats may not be a good decision, whereas a large home with plenty of space can easily accommodate several cats.

If you’ve decided two cats is better than one, the best way to go about it is to bring two (unrelated) well-socialised, friendly kittens into your home at the same time. Two kittens of the opposite sex and a similar age are considered the best choice as two males can be more likely to fight. Ensure you provide each kitten with its own food and water bowl, bed, scratch post, cat tower and litter tray. This will help reduce any competition for access to these high-value resources. If your cats are indoor only, ensure you provide at least one litter tray per cat plus an additional tray. Place the litter trays in different areas as two trays together are often considered to be one toileting area to the cats. Consider providing access to some safe outdoor space. This is highly valued by most cats as it offers the opportunity to smell, explore, play and sunbake, and helps keep them happy, even though they cannot roam around.

If you decide to bring a new cat into a home with an existing cat, it’s best to go with a friendly and social kitten. Ensure you separate the kitten initially and take the introduction process slowly. Set the kitten up with everything it needs in a separate room or area of the house. Allow the cats to come together during brief supervised sessions and ensure your cat and kitten have some distance between them. Use high-value treats and play with fun toys to initially create a positive association between them. As the sessions progress, use treats and play as rewards for calm and friendly behaviour towards one another. With a little time, patience and repetition, your resident cat and new kitten should learn to get along.

Two cats can be better than one, but this isn’t always the case. With a little research, time preparation and patience, you can reap the benefits of twice the feline fun!